Two Among the Righteous Few

A Story of Courage in the Holocaust 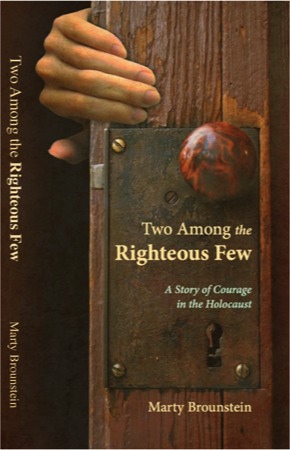 The book, “Two Among the Righteous Few - A Story of Courage in the Holocaust”, recounts the true story of the dynamic and heroic sacrifice made by a young Dutch Christian couple named Frans and Mien Wijnakker who saved the lives of over 24 Jews during the Nazi occupation of Holland during World War II. At a time when being Jewish or harboring Jews meant sure death, this couple put aside their own safety to do what was ethically right.
“Yad Vashem”, is a very special Holocaust Memorial and Museum in Jerusalem. The courageous Wijnakkers have been honored with a plaque as being “Righteous Among The Nations” at Yad Vashem, which is an honor bestowed upon non-Jewish people who helped save Jewish lives during the Holocaust and World War II.

Marty Brounstein, Author of “Two Among the Righteous Few”, has traveled coast-to-coast making hundreds of dynamic presentations about the book. He takes us on an educational journey through historic times telling us how the book came to be written, how the Wijnakkers made a difference during a time of indifference and how their humanity has changed Marty's life.